Citizens may contact the Office of Transportation Engineering or fill out a FCG FixIt to request a safety review at a particular location.

The Office of Transportation Engineering periodically gathers county-wide data to determine which county intersections and road segments are in greatest need of safety improvements.

Minor improvements are made by Highway Operations staff and more comprehensive improvements, such as road realignments, are developed into Capital Improvement Projects.

The Frederick County Neighborhood Traffic and Speed Mitigation Policy was originally endorse on January 4, 2000, and most recently updated on March 17, 2015.  The County Executive has delegated to the Chief Administrative Officer (CAO) the oversight of the policy and any appeals. The Division of Public Works will administer the policy on a day-to-day basis and will serve as the defacto contact agency.

County residents and Home Owner's Associations may petition the county to initiate a Traffic and/or Speed Mitigation.  If eligible, based on the results of a study, the mitigation effort may result in the installation of speed humps or other traffic calming device as warranted.

Bumps Versus Humps
The county does not endorse to use bumps, as shown in the image below.  The county only endorses to use either style of humps shown in the middle and bottom figures. 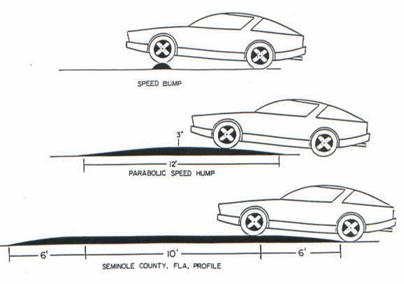